New research is adding grist to the mill when it comes to the use of silicon on crops and how it could help growers reduce their reliance on plant protection products. Extracted from our feature in Crop Production Magazine. Article published in CPM, Oct 2020.

Silicon is the second most abundant element on the planet, but most of it isn’t in a form that’s available to plants. Although all plants have silicon in their leaf hairs, it’s not classified as an essential nutrient. Even so there’s a growing body of evidence to suggest that silicon can help increase the resilience of plants to pests and diseases.

Significant research has been conducted around the world in monocotyledonous crops, such as wheat, which demonstrates that applications of silicon result in positive morphological changes, including strengened cell walls and increased leaf cuticle thickness, says Dr Avice Hall, plant pathologist at the University of Hertfordshire.

Additional benefits have also been noted, such as reduced disease infection alongside improved quality and post-harvest shelf life, she adds. Avice has been researching the effects of a silicon-based nutrient for several years in strawberry crops, as well as investigating the movement of silicon from root to leaf, and its subsequent deposition. “All plants need some silicon,” explains Avice. “However, silicon needs to be in the bioavailable form –– silicic acid (H4SiO4) –– to be taken up and utilised by plants.

Plants have silicon-transporter genes which function in the roots to bring the element into plants. Once inside the plant silicon serves to strengthen the cells where it has accumulated and fundamentally the entire plant structure.”

“It was evident that where silica was added, the cuticle and wax layer were thicker and phytoliths (encrusted silicon) appeared on the leaf surface. A fluorescent molecular tracker dye was used in further trials (using Sirius, a product that contains 21% silicon) and showed that silicon applied to plant roots accumulated in leaves –– in the upper and lower cuticle, palisade cells, stomata and in leaf veins. Sections of the petiole also clearly showed silicon accumulation in the cuticle and xylem
vessels.

“The first line in defence against any pest or disease is the outer layer of the leaves –– the leaf hairs, waxy cuticle, epidermal cells and cell walls –– which together form part of the passive defence pathway,” comments Avice. Disease monitoring of silicon-treated plots on a commercial farm highlighted a delay in the onset of powdery mildew compared with untreated plots, alongside a significant reduction in the overall disease infection.

“Our hypothesis is that because silicon gives thicker cuticles and thicker cell walls in the epidermis and palisade layer, this enhances the passive defence pathway thereby inhibiting penetration of the leaf structure by fungal pathogens,” she explains. Further benefits from silicon supplementation were seen in the trials, including an increase in the number of leaves, an increase in plant biomass, an increase in the number of runners, earlier flowering, and an increase in chlorophyll and Brix content. Another surprise finding of Avice’s research was that feeding by two-spotted spider mites was reduced and this effect was reliable and statistically significant over two different seasons. She suggests that the toughening of the leaf and the phytoliths which accumulate on the leaf surface (where silicon is supplemented) together have the effect of inhibiting two-spotted spider mites from scraping the leaf surface to feed.
This effect from silicon has been explored further in recent work carried out by i2L Research in Newcastle. The trial was performed in order to assess the efficacy of foliar-applied Deneb and Sirius (both containing bioavailable silicon) in reducing slug grazing. Separate wheat seedlings were treated with Deneb and Sirius, before being exposed to slugs over a period of 72 hours, explains Dr Catherine Whaley, slug specialist and managing director of i2L Research in Newcastle.
“Efficacy was measured in the form of changes to slug health and level of crop protection afforded. All treatment applications significantly reduced the severity of feeding damage sustained to wheat seedlings over the 72hr trial period,” she explains. The strengthening effect of silicon on the passive defence pathway has led Orion to commission i2L Research to investigate its effect on cabbage stem flea beetle (CSFB) (Psylliodes chrysocephala), explains the company’s commercial director, James Kennedy. CSFB were collected from a brassica crop during the summer 2020 from fields that hadn’t been treated with insecticide during the season but had a recent history of intensive pyrethroid usage.
“The results showed application of Sirius in combination with reduced rate lambda-cyhalothrin gave 67% mortality of CSFB compared with 17% mortality from lambda-cyhalothrin applied alone, which could prove a significant help to growers struggling to control the pest,” suggests James.
“The research already carried out on monocotyledonous crops around the world is extensive and demonstrates that bioactive silicon can help plants on multiple levels throughout the growing season.”

He emphasises that a bioavailable form of silicon is crucial to achieve advantageous changes to the morphology of the crop. “It’s important to distinguish between silicon adjuvants and silicon nutritional products that deliver a bioactive source of the mineral, since it is only the latter which delivers the benefits shown in the research.
“The detailed work conducted by Avice shows that the form of silicon in our portfolio is bioavailable and results in positive physiological outcomes. The further data from i2L Research begins to highlight the crop-level benefits from applying bioactive silicon and its potential in broadacre crops under UK conditions,” he comments. There are many more areas of reseach Orion wish to develop, adds James. “Published data shows silicon can reduce lodging when supplied in a bioavailable form due to the thickening effect it has on cell walls. It’s believed that accumulation in the xylem vessels of plants makes them more robust and provides greater turgidity, enabling them to have better resilience under drought conditions. This would be an interesting area to explore further.
“The studies this year have demonstrated that the application of bioactive silicon during establishment of OSR can directly assist with CSFB control and plant uptake of silicon makes them less susceptible to slug feeding damage. Strengthening an establishing OSR plant’s passive defence pathway may also make the plant more resilient to infection by autumn foliar diseases, such as light leaf spot and phoma stem canker,” suggests James. He makes it very clear that supplementing nutritional programmes with silicon isn’t a silver bullet and isn’t a strategy that will benefit all crops in all situations, but he believes it does give growers another tool to help plants realise their biological potential. “Including Sirius or Deneb in autumn crop protection plans strengthens an integrated management strategy. The ability to reduce pest and disease attack by improving plant resilience benefits the crop over the entire season and contributes towards sustainable production,” he concludes

To help growers get the best out of technology used in the field, manufacturers continue to invest in R&D at every level, from the lab to extensive field trials. CPM Research Briefings provide not only the findings of recent research, but also an insight into the technology, to ensure a full understanding of how to optimise its use. CPM would like to thank Orion for sponsoring this Research Briefing and for providing privileged access to staff and material used to help bring it together.
British company Orion is a pioneer in silicon-based biostimulant technology and has developed novel product formulations that stimulate natural plant defence mechanisms, with application across all sectors including agriculture, horticulture, ornamentals, amenity and forestry.
Working in collaboration with leading universities and research centres around the world, Orion is dedicated to broadening the understanding of silicon and the benefits it could offer different plant species, enhancing safe and sustainable global food production.

Suppliers of products and solutions for sustainable crop production 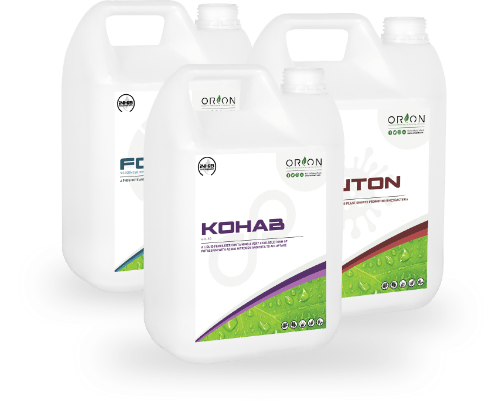 Part of the Milbank Group